Posted by Kelly's Chronicles in Uncategorized on January 30, 2009

A sad note my cat Noodles could not pee and that area was bloody. I took him to the vet but they are concerned he is not going to get better. My wife and daughter are frantic as he is their favorite cat. He is mine too but I handle things differently I guess. They put a catheter in him and are hoping for the best.

In addition, I have a pretty complete cast written for my book. If any of you are interested in editing it I would be glad to hear from you.

I had to do this quickly so I could be notified on my desktop when a new record was inserted into my database. I am sure there are better examples out there but this took 5 minutes. Make it a great day!

Have a hidden form in your desktop application.
1) Use a timer control.
2) Get the row count from that table and save it in variable VAR.
3) Compare with the saved variable VAR.
4) Update this variable every time.

I don’t know if anyone has reported this weirdness but here is a screenshot. 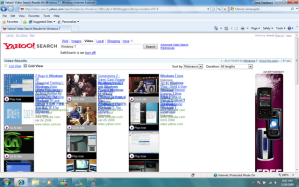 Collections that are thread safe with vb.net

Posted by Kelly's Chronicles in Uncategorized on January 28, 2009

Good Morning all! Some of you know I have started writing a fictional book. Last night I finished up completing the cast of characters the book will use (though I am sure there will be other changes) and thought how I will begin the book. Now if you know any literary agents please send them my way please! If you have enjoyed my writing up to this point. 🙂

Anyway, back to the real world…..We needed to prevent changes being made by other threads when enumerating through our collection. Basically this prevented the threads from making changes while enumerations were occurring. It uses the concept of SyncLock to prevent these changes from being made.

Make it a great day!

Posted by Kelly's Chronicles in Uncategorized on January 27, 2009

Posted by Kelly's Chronicles in Uncategorized on January 26, 2009

Hello everyone. Just wanted to drop a note that at 1:53PM CST time today this blog reached its 20,000 Pageview milestone since May 2008. Just wanted to say thank you and share some stats with you like I did at 10,000. Thank you for those of you that come here and have gotten to know me. I have actually enjoyed the experience. And I know a lot of you get more. But hey its just me and the fact that you came is so cool to me.

Here are the stats….

The 20,000th pageview was made from someone in Carrollton, TX at IP address 66.139.201.2 from Unimed Direct Llc. They visited the blog entry “Convert DataTable to a Generic List of Class with vb.net”. The were referred by Google of course at http://www.google.com/search?hl=en&q=convert+datatable+to+List%3CT%3E

The most popular pages are:

The most popular browsers are:

The Danger of Jumping To Conclusions

Posted by Kelly's Chronicles in Uncategorized on January 26, 2009

I had an interesting situation I encountered this weekend. I ran into an individual who in the course of conversation with others, was said to be a pedophile. I felt a sense of moral outrage that this person was in my presence. When he sat down at our table the conversation stilled and then stumbled into silence. I saw other people staring, their eyes doing what their fingers wanted to do – point and gawk. I observed the electronic monitoring bracelet he was wearing around his ankle and thought to myself, “What would I do if he ever came around my children?” My thoughts turned dark, filled with anger, venom and hate. I imagined myself using this man for a mop.

After lunch I returned to my work station and as fate would have it, there he was next to me. It turned out his workstation had gone on the fritz unexpectedly and there had been an opening next to mine. I put my Zune back on my ears, resumed working, and prayed he would have the decency and common sense to leave me alone.

Unfortunately this was not to be. About a half hour later, I felt someone touching my shoulder. I pulled off my headphones and turned around and there he was. Normally I would have a friendly demeanor in this situation. Not this time. I said in a rather terse voice, “What do you want?”? He asked me if I had a pen as his had died. I of course did and gave it to him. I was just about to return to my music and work when I overheard him on the phone talking to his ….daughter. I thought to myself, this guy has a daughter? Again I felt my moral revulsion return, but of course I turned the music down so I could hear the conversation.

It seems his daughter was 7, and he spoke to her tenderly, telling her that her mom would be home soon and not to worry about her brother picking on her. He asked what she had had for breakfast and clearly shared an inside joke about that as they laughed together. He asked her to do her chores. He then hung up and returned to his station. If I had not known what I had thought I had known about him, I would have thought he were an excellent father and person. He related to his children on their level while still being a parent. No easy task as I or any parent might be able to tell you.

Drawn to him now, I asked him how many children he had? He seemed startled by the question as if he was not accustomed to being spoken to. He answered me 4, and had been married for 15 years. We made small talk for about 10 minutes and then he said, “Why don’t you ask me what you really want to ask me?” I sat silent, not knowing what to say.

He said, “Yes I was convicted of having sex with an underage child. I was 21 and she was 16. We both believed we were very much in love. Her parents discovered me and I was arrested for statutory rape.”. It seems after he had been convicted and served some time in the county jail he had been required to register as a sex offender for a certain number of years. He had moved from Florida to Wisconsin in November and he simply forgot to register again which resulted in a new criminal charge which was why he was now on electronic monitoring.

I felt sick again, not because of him but because of me. I had already thrown this human being out with the bathwater, dismissed him, judged him and sentenced him in my mind without even a second thought. I had imagined hurting him if he came near my kids, and damned him to an eventual spiritual hell. I thought of everything I had ever done that if I had had to wear a scarlet letter proclaiming it to the world, how much shame, self loathing and how difficult my life would be.

Don’t get me wrong. There are plenty of people in the world that deserve to be marked in this fashion. But I must remember that for each and every person there is a story. To lump them all together as a whole is narrow and bigoted.

I continued my conversation with him finding out we had a lot in common. He is into monster trucks, .NET, 80’s rock and such. He would be classified as a religious person I think in his morals, and by all accounts is an excellent father and husband.

When I went on break, I had two co workers come up to me and ask me what we had talked about and why I was engaging this person in conversation. It was the moment of truth for me. Would I defend him? Would I lack courage and say I was just humoring him? I decided not to do either. I decided to tell them that they should talk to him themselves as they might be surprised at what they might find out. I just didn’t feel comfortable engaging in this conversation. And I thought well you know what? Maybe, just maybe they might learn the lesson I had learned today – making a judgment based on hearsay is wrong and that you should go to the source. I asked God to forgive me and went on with the rest of my day.

We Stopped To Witness Historical Inauguration

Posted by Kelly's Chronicles in Uncategorized on January 20, 2009

Posted by Kelly's Chronicles in Uncategorized on January 20, 2009

Keep in mind I don’t have Office or Visual Studio installed so far but this is so much an improvement on XP and Vista it is breathtaking! Installation took 15 minutes! More as I learn more…..